There are lots of pictures to look at today, I have been putting the little Merz under the microscope to check whether it was painted brown or whether it was chemically coloured and then lacquered.  I compared the brown foot of the Merz with chemically blackened areas on the Merz and with the paint and lacquer of a very old Reichert that I had to hand. I also looked at a microscope I lacquered myself to see how my lacquering compares to the masters! I used a trinocular Olympus SZ stereomicroscope and a Canon EOS 1100D

First, two pictures of the brown areas on the Merz. Click thumbnails to enlarge.

The picture of the left shows what a small scraping of the “paint” looks like. This scraping was made near the area of corrosion which will have to be replaced anyway. The picture on the right show some intact “paint” 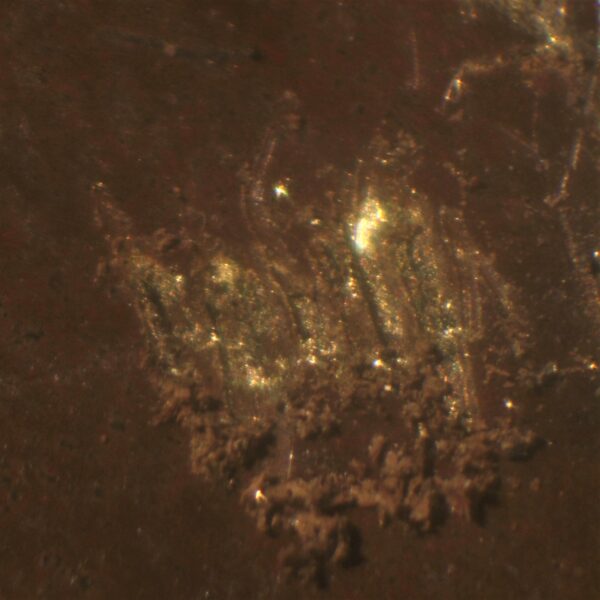 It certainly looks like paint although it is an extremely thin layer. For comparison here are another two pictures. On the left, a chemically blackened area on the Merz, on the right the paint on the foot of a Reichert. 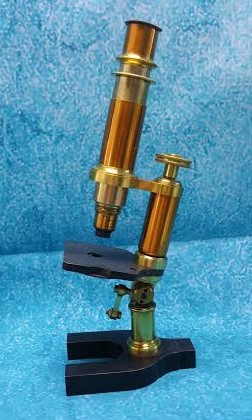 BELOW: The rather interesting pattern made in the “paint” by the corrosion is shown on the left,  in the centre is the lacquer on a lovely old reichert and on the right is some of my own lacquering. I’m pleased to say that the surface looks correct. the underlying metal on the piece I did is in worse shape but that is to be expected. It was heavily corroded when I got it. I wouldn’t have needed to lacquer it if it had been in the same condition as the Reichert. 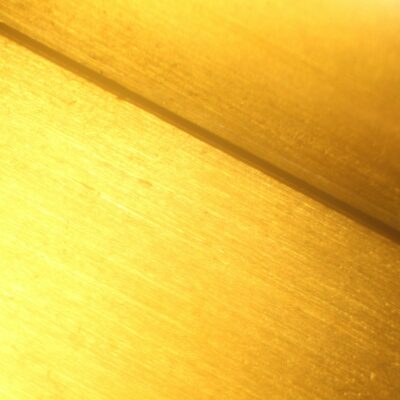 I’m thinking that the microscope was painted, I can see brush marks in one area which also makes me think it was painted rather than chemically coloured/lacquered but it is quite hard to be sure. It could be that the chemical colouring has somehow soaked into the lacquer and coloured it. I may have to consult Henley’s 20th century recipes to check a few old methods of chemically colouring brass before I start doing anything drastic.

I wish I had a mass spectrometer.  I asked my husband, he said he’d put it on the shopping list and that as long as they have them in Tesco he’ll get me one.

We use cookies on our website to give you the most relevant experience by remembering your preferences and repeat visits. By clicking “Accept All”, you consent to the use of ALL the cookies. However, you may visit "Cookie Settings" to provide a controlled consent.
Cookie SettingsAccept All
Manage consent

This website uses cookies to improve your experience while you navigate through the website. Out of these, the cookies that are categorized as necessary are stored on your browser as they are essential for the working of basic functionalities of the website. We also use third-party cookies that help us analyze and understand how you use this website. These cookies will be stored in your browser only with your consent. You also have the option to opt-out of these cookies. But opting out of some of these cookies may affect your browsing experience.
Necessary Always Enabled
Necessary cookies are absolutely essential for the website to function properly. These cookies ensure basic functionalities and security features of the website, anonymously.
Functional
Functional cookies help to perform certain functionalities like sharing the content of the website on social media platforms, collect feedbacks, and other third-party features.
Performance
Performance cookies are used to understand and analyze the key performance indexes of the website which helps in delivering a better user experience for the visitors.
Analytics
Analytical cookies are used to understand how visitors interact with the website. These cookies help provide information on metrics the number of visitors, bounce rate, traffic source, etc.
Advertisement
Advertisement cookies are used to provide visitors with relevant ads and marketing campaigns. These cookies track visitors across websites and collect information to provide customized ads.
Others
Other uncategorized cookies are those that are being analyzed and have not been classified into a category as yet.
SAVE & ACCEPT